HPNOTIQ is known for its sexy blue color of liquer which changed the alcohol beverage industry in the early 2000’s. It was extremely popular for how the brand looked and powerful entertainers who have major influence over pop culture had taken to it. The most notable drink was HPNOTIQ and HENNESSY which together would for a green colored drink that party goers named “Incredible Hulk”. Fast Forward to 2015, HPNOTIQ is doing a makeover revamping the brands marketing as a whole. They have partnered up with rapper Cam’Ron, Worldwide DJ/Entrepreneur VashTie, rapper Yung Jake and Artist/ Vision expert Naturel. The new campaign is called “Since 2001”, reminding everyone of what that feeling was like when HPNOTIQ made their impact. They are truly back for their spot in the liquer section.

Naturel is taking the lead on this project to use his creative + uniqur mind to revamp the marketing aspect on this brand to go forward and gain market share in a tough industry. He is a illustrative artist with 10,000+ instagram followers who pay close attention to his work. You can call Naturel an influencer and innovator with his skills.Many celebrities have called on his talents like Spike Lee, Swizz Beats, Lebron James and Rihanna to name a few. Major corporations like Pepsi and Nike have called on him as well to collaborate of project ideas. 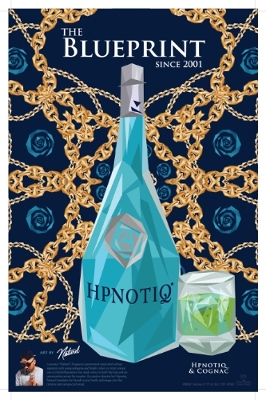