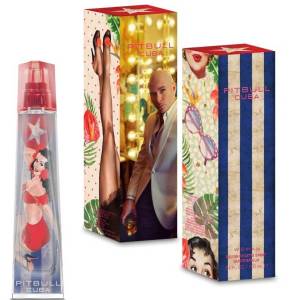 Pitbull is a global superstar who has touched so many countries with his music while gaining a mega fanbase that supports his every move. Being  proud of his Cuban decent, Pitbull has partnered with Parlux again to release another one of his special fragrances, this time its called “Pitbull Cuba”. The brand is inspired by his major roots into the Cuban community and nightlife. This will be a male and female fragrance release in stores March 2017.  By creating this sexy brand “Pitbull Cuba” he’s flaunting his entrepreneurial spirit to the world while expressing his love for his Cuba heritage. He has always been a role model for all the young Cubans coming up especially in the entertainment industry. Success has never been an issue for this global lifestyle ambassador of  rhythmic talent. Lets support “Pitbull Cuba” when its released to the world.